Was very lucky today.  Started my Tip to go to work and it dragged, as in a low battery but started. Heard a whining sound, shut down, opened hood, smelled burnt rubber. Thiught it may be the alternator, power steering pump, or A/C seizing up.

It stopped making the whining sound and I saw no smoke, the belts did not feel warm, so I headed on to work.

By lunch, I had time to think through some possible causes and had come to the conclusion that it had to be a balance shaft belt idler seizing.

I pulled off the plastic cover at lunch and almost had a heart attack!

The balance shaft belt had snapped and wadded up close to the tensioner. I wish I had taken a picture, but I was in a hurry to unwad the mess and check for further damage.

The belt was in several pieces and evidentally some had spit out the lower belt cover because it (the belt) was not complete.

So after cleaning up the mess, and a few deeep breaths, I started the car and expected shaking and rattling from having no B/Shafts. Felt just fine...it had always shook a bit, I suspected bad motor mounts but they look good. I had done a belt inspection as well as checking the balance shaft marks to make sure they were correct recently when I had to replace the damper.

I'm going to have to drive for a few days til I can make it home to switch cars.

As I said, I feel no unusual vibrations, in fact, it may be a bit smoother. Will be checking balance shaft marks very closely. Looking for a good kit for TB&BS redo.

All I can say is to check and replace those belts. I have had the car for 4 years, have inspected the TB & BS belts twice and they appeared good... just got lucky this time.

Permalink Reply by Monte Olsen on October 23, 2012 at 2:11am
Thanks Ken. I just discovered that some seals around my balance shaft had basically split, which was causing an interesting oil leak. It appeared as if the oil was coming from the rear main seal. I hope that this eliminates the leak.

I hope your car is OK.

Had the same experience with my recently purchased '93 968 manual coupe.  Noticed a slight vibration and expected to find the balance belt a tooth out.  BTW my son and I had just taken delivery of the car in Sydney, Australia and driven it 1000km north to Brisbane.  On taking the timing covers off, was flabberghasted to see, as the OP did, the balance belt sitting in the bottom of the case in many pieces.  But wait - there's more!  Turned the motor over (by hand) to inspect the cam timing belt and discovered half-teeth and some missing teeth.  Talk about dodging a bullet!  Pics attached. 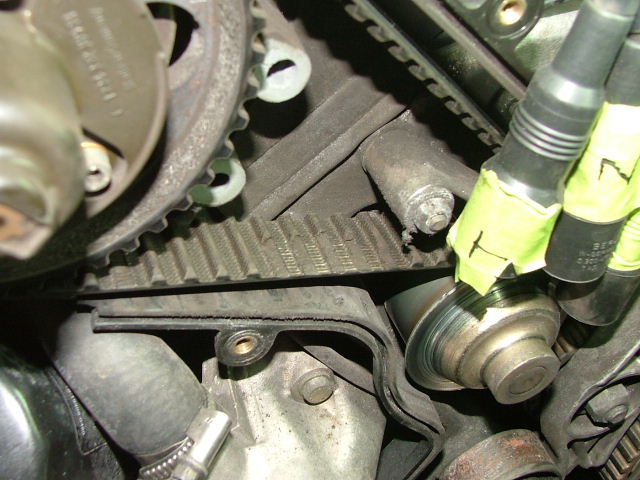